Pulling back to a broader context. One of the books I read earlier this year was Rust Belt Arcana, and I can’t recommend it highly enough. You’ll learn pretty amazing things about what flora and fauna are engaged in and how they do it, about how humans change their course sometimes, about the dramatic cycle of creation, destruction, and re-birth anew, and about ourselves. 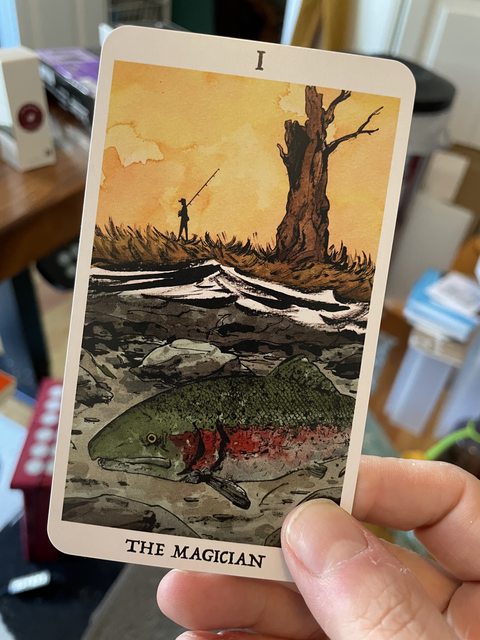 The Magician card, in the accompanying essay, is recast to be about the fly fisherman as hero/huckster and the steelhead trout.

“An ocean-going trout from the Pacific Ocean climbs industrial, sewage-tainted rivers in the Midwest. The river is both sick and healthy. The trout is both wild and made.”

Author Matthew Stansberry and Illustrator David Wilson use the archetypes of the traditional tarot deck to tell the sweeping story of ecology and how humans intersect with the living world around us. It tells the eternal story but also what’s happening among the flora and fauna right now. It veers pretty far from the traditional interpretations of the various cards, but does so in thoughtful ways respectful of the traditions.

I’d read an essay each night, each a scant few pages of a self-contained story about a plant or animal or natural force, with an accompanying illustration. The stories weave together in both subtle and obvious ways, and they highlight ways plants and animals can be seen coping, adapting, struggling, failing, thriving, surviving, dying out.

If I had written this closer to when I was reading the book I’d have done three bananas each dedicated to one of its cards. But I came back to it now because I came across an explanatory pdf presentation that Stansberry put together, that explains the project and also shares explanations for the cards not covered in the bound book, the minor arcana. You can flip through it here. 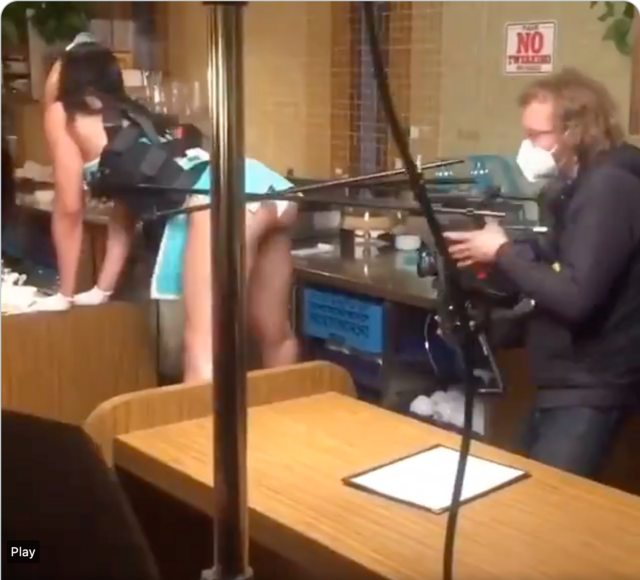 And here’s the resulting footage as it appears in the finished video.

Shaffer had more explanatory/behind the scenes footage up that he had to take down, but he provided this explanation:

I’ve seen this come up a couple times. This rig is called a DoggiCam. It’s made for body mounted face shots. We just had to figure out a way to look at a twerking butt with it. Basically the exact opposite of what it’s made for.

I love not knowing about certain things. David Lynch’s explanation of the crucial role of mystery in storytelling is worth keeping on a post-it note somewhere: 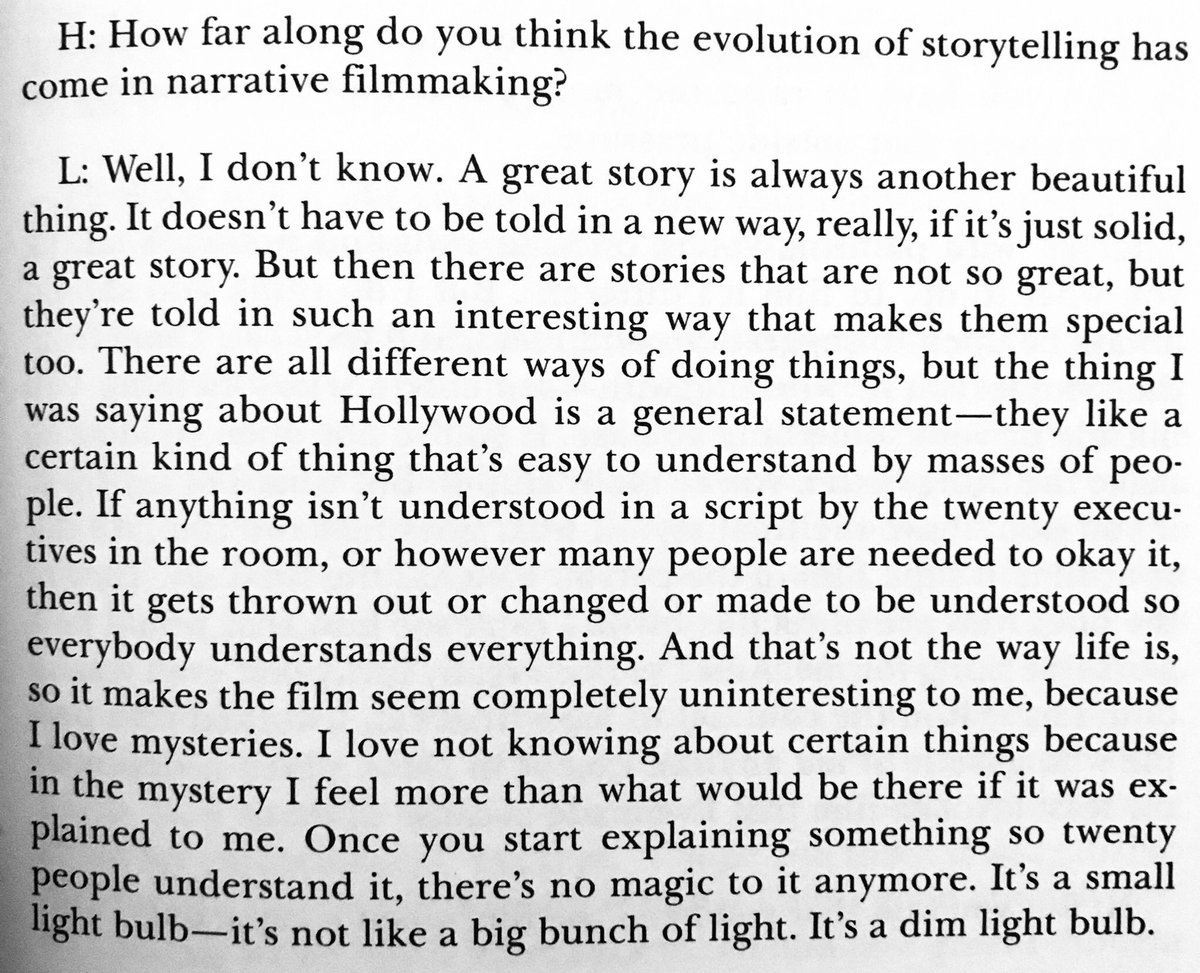 here’s David Lynch on the beauty of mystery

I’m going to transcribe it as well to get it out of the image format and make it accessible to all:

“H: How far along do you think the evolution of storytelling has come in narrative filmmaking?

L: Well, I don’t know. A great story is always another beautiful thing. It doesn’t have to be told in a new way, really, if it’s just solid, a great story. But then there are stories that are not so great, but they’re told in such an interesting way that makes them special, too. There are all different ways of doing things, but the thing I was saying about Hollywood is a general statement — they like a certain kind of thing that’s easy to understand by masses of people. If anything isn’t understood in a script by the twenty executives in the room, or however many people are needed to okay it, then it gets thrown out or changed or made to be understood so that everybody understands everything. [emphasis mine]: And that’s not the way life is., so it makes the film seem completely uninteresting to me, because I love mysteries. I love not knowing about certain things because in the mystery I feel more than what would be there if it was explained to me. Once you start explaining something so twenty people understand it, there’s no magic to it anymore. It’s a small light bulb — it’s not like a big bunch of light. It’s a dim light bulb.”

In my creative career thus far, I’ve been in roles where the art and craft was about really good explanations that thousands and thousands of people could pick up and understand - like at HowStuffWorks, for one. And that was satisfying in its own way. And I’ve been in roles relating to PR, Marketing, and Advertising, where it’s crucial for the piece of work to be crystal clear, perform a job, and easily absorbed by as many people as possible. But I think what was so incredibly satisfying in an entirely different way about my early work at Giantheads, the web entertainment studio, was that this notion of preserving and presenting mystery was at the heart of what we were doing. And we were doing this in the middle of a web world at the time of big dumb jokey flash animations, dancing babies, and rapping, dancing mouthy dead presidents. We sought to avoid winking at the audience at all costs, and dropped you right in to whatever, whoever, and wherever it was we wanted you to see.

In the world of podcasting, in which I’m mostly focused now, I think you can find it from time to time. I’ve seen that quality pop up here and there in shows I’ve stumbled upon. Mostly in fiction shows. And it doesn’t have to be in dramatic or deep or tragic modes like those of David Lynch. I’ve seen it in particular in the fictional world that Valley Heat has created, which is entirely a comedic show. It’s a much richer world because the edges extend beyond what’s explained or defined, and that gives it an unknowable quality that feels like the way life is. I think you can find it in nonfiction work as well, maybe in true stories that are somewhat obliquely or artfully told, and in shorter works that don’t dress up the first-person piece with too much backstory and preamble. I find a lot of good mystery in the way Erica Heilman’s Rumble Strip parachutes the listener in to moments in the lives of the people with whom she speaks.

Bonus banana: Good friend and bananahead Leah Jones interviewed me this week for her show Finding Favorites about how and why I picked up the trumpet at age 39, and we also veered for a while into my career shift into podcast production. Kind of a meta-banana and a rare opportunity to hear me talking about myself on mic.

These are the bananas I found for you this week. you can hit “reply” and it’ll go only to me. Thank you.

You just read issue #56 of Three Banana Thursday. You can also browse the full archives of this newsletter.