Swingin on the Flippity-Flop. A great story shared by video game writer @MitchDyer:

Mitch Dyer @MitchyD
My favorite story ever: In 1992, a NYT reporter called Sub Pop Records wanting to know grunge slang terms. Receptionist Megan Jasper made-up a bunch of lingo to fuck with him, and he published it. Today @meganjasper is Sub Pop's god damn CEO. I use "harsh realm" ~daily~ 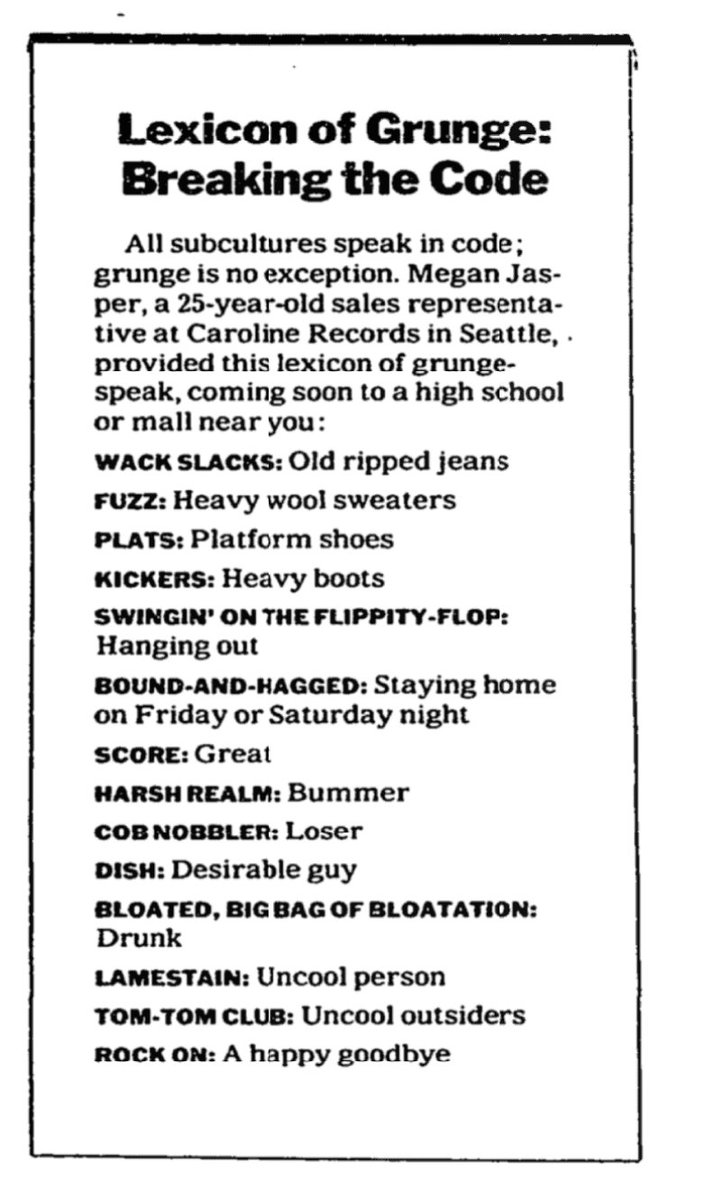 There is so much going on in this photo by Irving Penn of “the arctic explorer Peter Freuchen [Danish explorer who fled the Nazis] and his bored wife Dagmar [fashion illustrator for Vogue]” (Photo and descriptions tweeted by @rachelsyme). In the extended thread I found this bit shared by Andy Beaton: “”During WWII,.. was actively involved with the Danish resistance movement … He openly claimed to be Jewish whenever he witnessed anti-semitism. Freuchen was imprisoned by the Germans, and was sentenced to death, but he managed to escape and flee to Sweden.” He’s all right.”

What’s allowed in the genre of literary realism? I loved this exchange in an interview with accomplished authors Marlon James and Victor LaValle in Vulture about how the line between so-called genre fiction and literary realism is, and should be, blurring. I want to give you the full exchange, in the hope that you’ll click through and read the rest of a really great interview:

“Let’s talk about what’s going on in speculative fiction today. How is it changing?

MJ: There are so many writers now who’ve been blurring the line between so-called literary and so-called genre that they become almost meaningless. It used to be people thought you were slumming if you wrote genre.

VL: Genre work can still face that problem of people saying, “But what’s it really about?” That can still be the sticking point for this stuff being “taken seriously” or not.

MJ: There’s this rush to think that the only way readers can take it seriously is if it’s an extended metaphor for something. But when I was writing this novel, I don’t think I was messing with reality — I was writing reality.

VL: Literary realism demands that everybody agree on what real life is — and it is really a very specific subset of American or European life — but if all the writers and the critics and the jurors for the prizes agree that this is our life, it becomes realism. I love reading the fantasy of middle-class life in Connecticut, because I’ve never lived that before. Do you all really cheat this much? That to me is like, Wow!

MJ: I grew up in an independent Jamaica, but my classes were still very British colonial. I was taking British exams because it was all that was available. But, the difference between me and my parents was that they couldn’t stop pop culture. Despite it being impressed on me that this, over here, is literature, and comics are something different, I grew up refusing to distinguish between them. I am getting the same feeling from Love and Rockets that I’m getting from One Hundred Years of Solitude, but I’m supposed to look at one as, that’s comics and that’s a serious novel? From a very early age, I thought, That’s bullshit. The whole idea of a great American novel is bullshit. But if you twist my arm, I’m probably gonna say American Tabloid and Love and Rockets.”

From @MascotSilence, photos of mascots observing moments of silence.

Processed foods seem to lie to your body. “the fidelity of gut-brain signaling and the resulting representation of food value is compromised by processed foods (3, 4). Understanding this axis could inform about feeding behavior involving processed foods and obesity.” We all know that food science is a thing and that mass produced processed foods are optimized in labs to perform in specific ways. In addition to their optimization for shipping and storage, they’re engineered to hit a certain combination of tasty attributes and to make your body and brain react predictably. And want more.

It seems intuitively obvious that the rise in obesity over time is attributable to the shift in eating habits towards mass produced and engineered foods, but although we learn more all the time, the details and mechanisms for how all this works continue to elude us.

This fascinating review of studies in Science explores some of the ways those things work - how it appears that processed foods manipulate the signaling between your digestive system and your brain (or your thinking/feeling/deciding system more broadly.) In short, it’s not just the presence of various nutrients (or how sweet or caloric a food is) that affects your body’s reaction to it; it’s also some very specific properties that food scientists have been able to hack. These properties include the relation between the calories and the sweetness level, and the balance of carbs and fats within a given food. So it’s not as simple as that you crave more carbs, or you have to have something sweet - you crave a particular food that elicits a specific reaction signature in your bloodstream in a very crafted way: “in humans, as in animals, it is not the presence of the nutrient in the gut or the blood that drives reinforcement but rather the generation of an MNA [metabolic neural afferent] when the nutrient is used as a fuel that is critical. The mechanism behind this “mismatch” effect in humans is unknown and warrants further study.”

Those are the bananas for this week. You can hit reply and it will go only to me. Your thoughts and reactions are always welcome. Thank you.

You just read issue #5 of Three Banana Thursday. You can also browse the full archives of this newsletter.